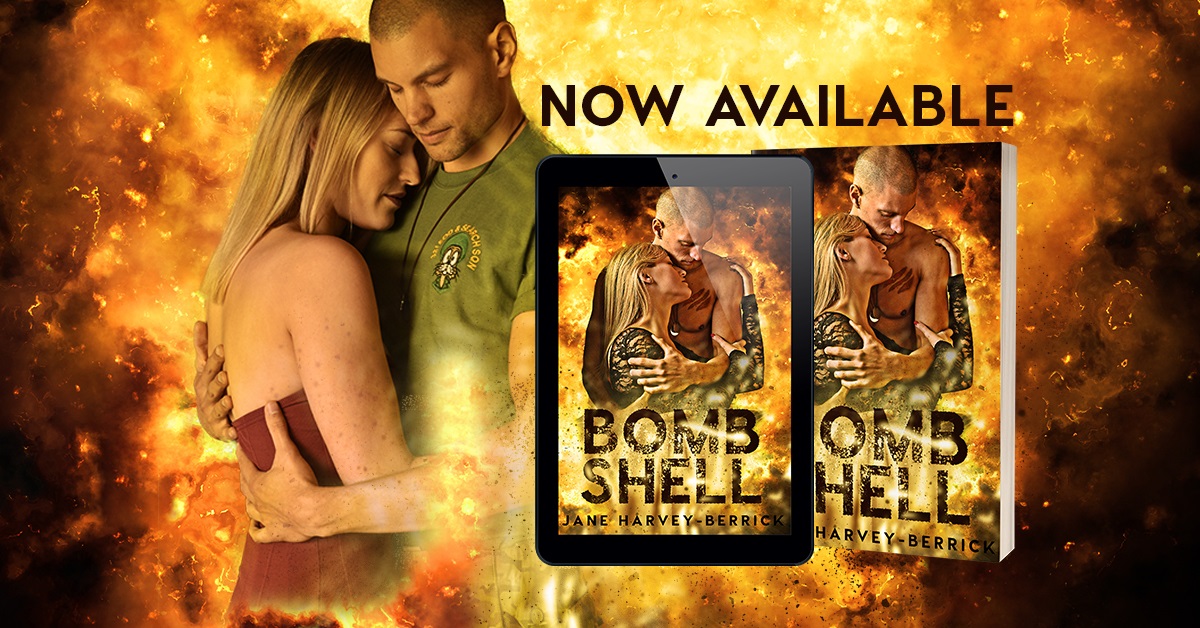 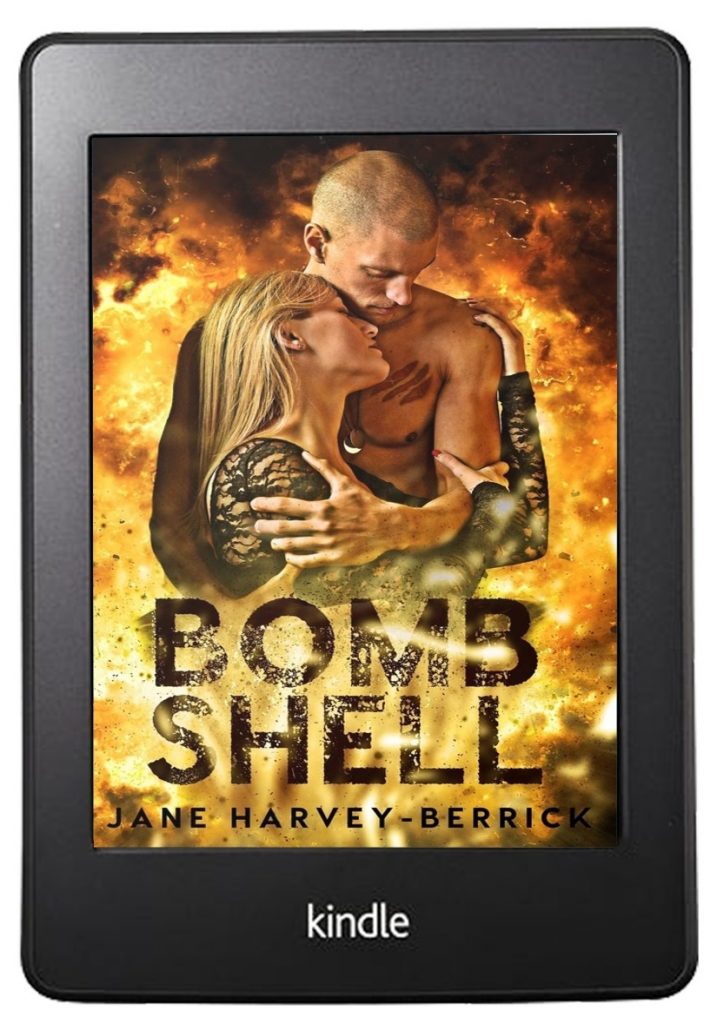 Sergeant James Spears isn’t heartbroken because he doesn’t have one. His heart was ripped from his body when the love of his life was killed in an IED attack in Syria.

Ironic, since James is an elite soldier whose specialty is neutralizing bombs.

When he meets the flighty, shallow socialite, Lady Arabella Forsythe, he detests her on sight. She’s everything he despises, and the complete opposite of the woman who stole his heart and buried it with her.

Arabella is sleepwalking through her life. Nothing holds her interest for long, not bingeing on champagne and cocaine, sleeping with princes and peers of the realm, not even her own family who are desperate to rehabilitate her.

When two lost souls meet in the grim underbelly of a world that most people avoid, they recognize each other’s shattered reflections. And maybe hatred is the other side of love.

Book 2 in the EOD Series #standalone 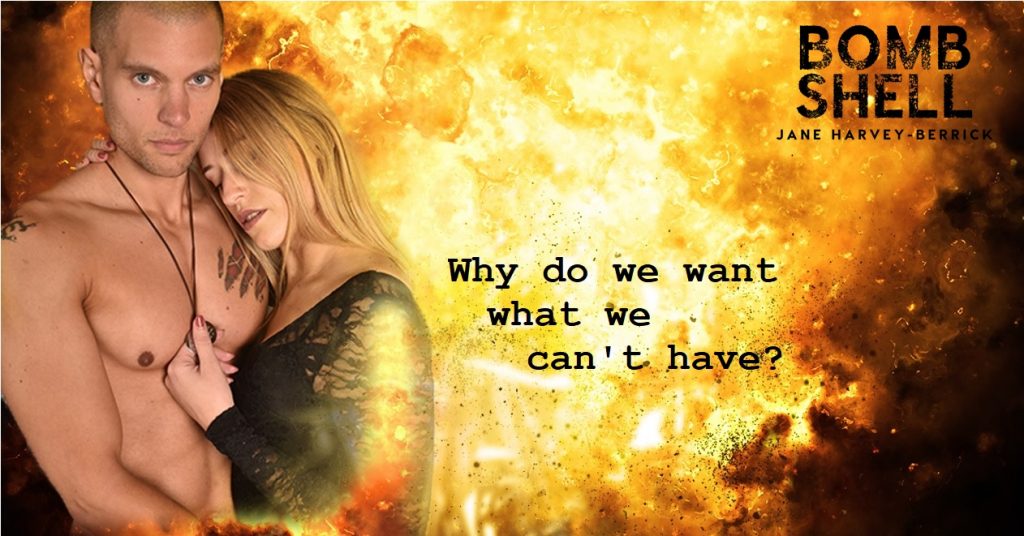 The first time I tried to kill myself, I failed.

The gun misfired. I kept pulling the trigger and nothing happened, just empty clicks and a cosmic frustration.

But next time, I’ll do it right, no mistakes. I have it all planned out. There’s a bottle of 25 year old Irish whiskey with my name on it, a handful of sleeping pills, and a plastic bag over my head. It will be a quiet end, peaceful. Which is ironic really, and nothing like the way I’ve lived my life.

So with everything in place, the last thing I want is to find a reason for living. 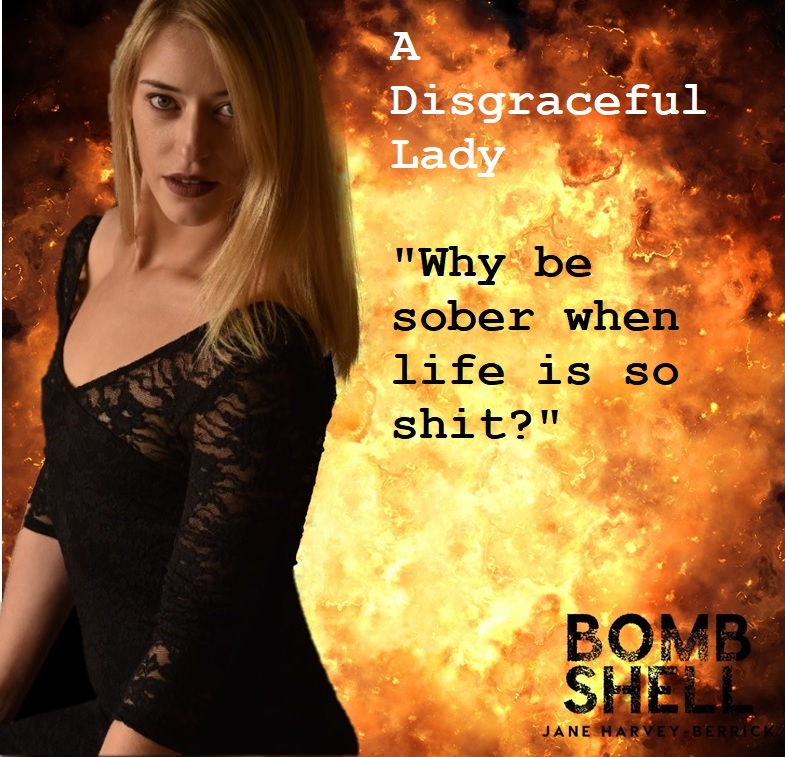 I leaned against the police sergeant’s desk, my head spinning. God, I was drunk. I’d lost count of the glasses of champagne I’d knocked back.

“It’s Harry,” smirked my best friend Alastair, his eyes glassy as he lolled in the uncomfortable plastic seat next to me.

“Arabella Forsythe,” I said, although it probably sounded more like ‘Ar’bell Forzuth.’

I was smashed, totally bladdered. And there was no way I could manage my full name.

Trust Alastair. He never could keep a secret.

The policeman rubbed his cheek tiredly.

“Welcome to Paddington nick, your ladyship. Empty the contents of your pockets.”

ArabellaI’d never heard of a ski resort in Azerbaijan, but I suppose the former Communists had to ski somewhere other than Klosters.I loved being on the slopes with freshly fallen snow, and the mountain air sharp and clean. Off piste was my favourite type of skiing.Maybe this trip was looking up after all.

So the next morning, I dressed in coral pink salopettes with matching jacket, and sashayed down to the car.

“Good morning, Ivan!” I trilled to the surly Slav.

His name wasn’t Ivan but it seemed to irritate him, so I said it every morning.

My mood took a dive when Dad appeared—no change there then.

He glanced at my outfit then climbed into the car without a word and we started another long, silent drive.

The scenery began to close in, the hillsides thickly covered with towering fir trees that shut out the light. I saw piles of dirty snow at the sides of the road and glimpses of brilliant white on the distant peaks, until finally, we approached an ugly straggle of prison-like huts. With a sinking sensation, I knew that skiing was not going to be on the schedule for today.

Barbed wire circled the huts, making it look like a Siberian stalag. The only things missing were the machine guns.

A tall black guy wearing jeans, heavy boots and a thick jacket came striding across the muddy forecourt outside the desolate concrete block buildings. He had the look of someone ex-military and walked towards us, extending his hand to my father.

Rather incongruously, an acid yellow lollipop was sticking out of his jacket pocket.

“It’s a pleasure to meet you, sir. Your generous donation will enable us to continue our work for many months to come.”

Now I understood. This must be the base for one of those landmine demining places, whatever they were called. Although this was a lot more squalid and grey than the videos I’d seen of Princess Diana wearing body armour in bright African sunshine.

As Dad soaked up the words, spoken with an American accent, I longed to tell this man that my father’s donation wasn’t selfless or altruistic—it was a down payment to the Azerbaijan government, an unspoken agreement that my father would be in pole position to exploit the coal beneath our feet.

“And this must be Miss Arabella Forsythe,” said the man with a friendly smile. “We’re honoured that you’re here—we certainly need all the volunteers we can get. I’m Clay Williams, Head of Operations.”

I smiled politely, wondering if this American was getting me confused with someone else.

“My daughter is a true humanitarian,” Dad replied with a reptilian smile.

His words were perplexing, and we shook hands in silence. It was also the first time that one of my father’s business associates had known my name in advance. An uneasy sensation trickled through me, a sense of dread that I couldn’t identify.

“The accommodation is limited,” said Clay, his smile more wry now. “But the welcome is warm. I’m sorry my wife isn’t here to welcome you. She’s in the village, helping out at the health centre. You’ll see her later. Let me take your bags.”

Panic flashed through me.

“Dad? Are we staying here?”

“Yes, Arabella, you are staying here. Mr. Williams requested volunteers and I volunteered you. You’ll make yourself useful and work under him for the next three months.”

My father grabbed my arm and dragged me out of earshot.

“Did you think that your punishment would be gadding about, accompanying me to a few business meetings? Do you think that makes up for the £37,000 restaurant bill you ran up? The tradesmen’s bills all over London? The shame you’ve brought on our family? Do you think I’ll put up with bailing you out of the drunk tank again? No! It’s enough, Arabella. You will volunteer here, where no one knows you or cares about you. You will do this. You will not embarrass the family ever again. Do you hear me? Do you hear me?” he hissed, shaking me until my teeth rattled. 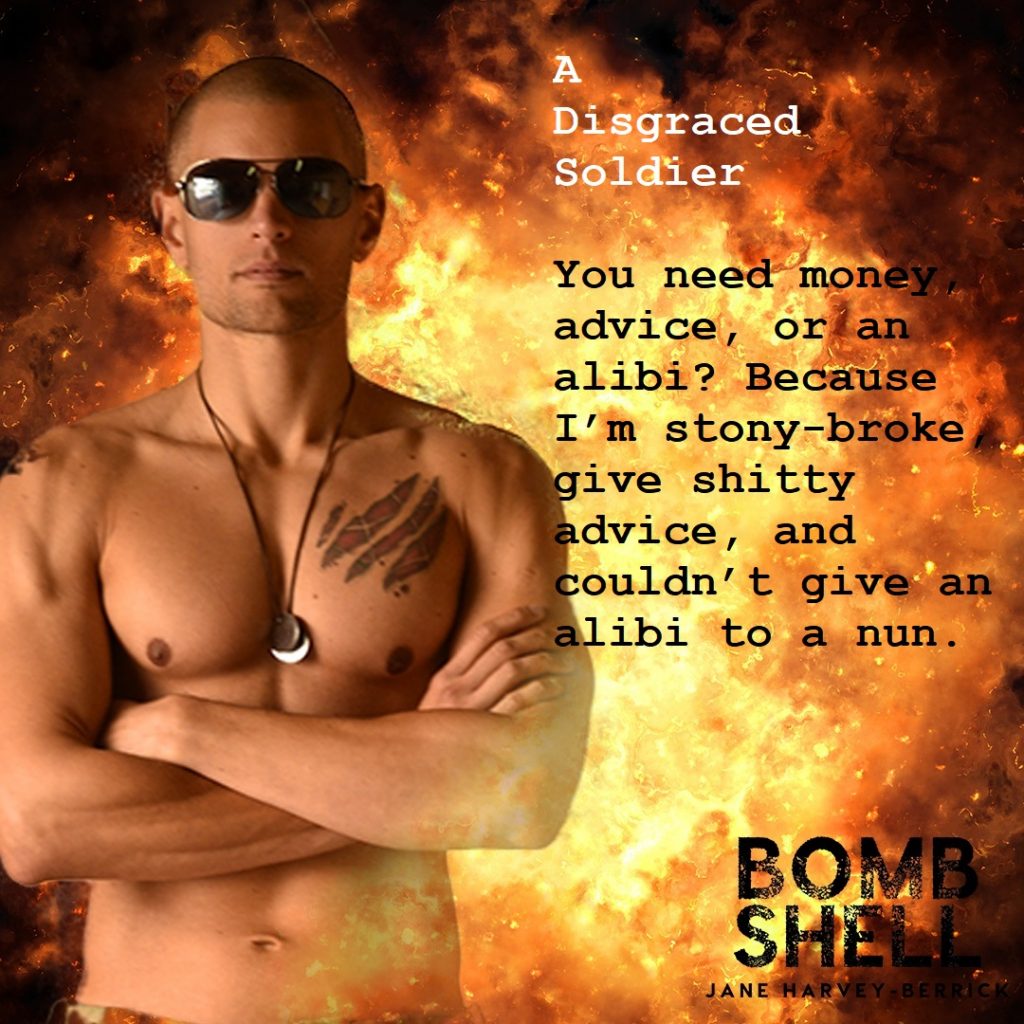 As we approached the motley collection of ugly buildings that I currently called home, a wave of tiredness came over me. It was always the same at the end of an op, the relief of surviving another one, the letting go of all the awareness, all the tension of responsibility to not get anyone killed.

But before I could do anything else, I had to report to Clay and decide what to do about Yad.

I dragged my weary arse toward the prefab building that was the Trust’s office, and stopped.

Why do we want what we can’t have?

That was my first thought when the woman walked into the prefab hut ahead of me.

My second thought was, what the fuck is she doing in a flea-infested shithole like this?

I was in the armpit of the world, one of the most dangerous and corrupt territories to come out of the ex-Soviet Union, and she was wearing a luminous pink ski suit, with blonde hair tumbling over her shoulders.

Am I hallucinating? Have I finally gone completely crazy?

But if not, what the hell was she doing in the middle of landmine country, with Russia to the north, Iran to the south, and hell on earth all around?

I knew what I was doing here.

Penance. I was doing penance.

My head started to swivel when I saw her, and if I’d been a cartoon character, my tongue would have been drooling on my mud-caked boots.

She was stunning. No other word for it. A real bombshell. Tiny waist, nice tits, rounded hips, and long, long legs. Her hair was waist-length, curling in silky blonde waves. It seemed unreal against the backdrop of mud and grey.

But when she turned and her eyes caught me looking at her, there was no light of triumph, no recognition that she was God’s gift to man. Instead, the dark blue irises were emotionless. Her gaze flicked up and down my tatty, dirt-stained clothes without interest, her expression of weary resignation and an untouchable, impenetrable isolation.

There was something old in her eyes, something that said she’d seen enough, even though she couldn’t have been more than twenty-five. For the first time in a long while, I wanted to understand, wanted to know what she’d seen, what she’d experienced—and that was a scary thought. I didn’t like being scared and I didn’t like feeling guilty—it made me angry. I should stay the hell away from her.

But I got it, I did. She was the kind of woman that men fought over. She probably started wars. She was a goddam Helen of Troy.

And you know what happened to the Trojans… 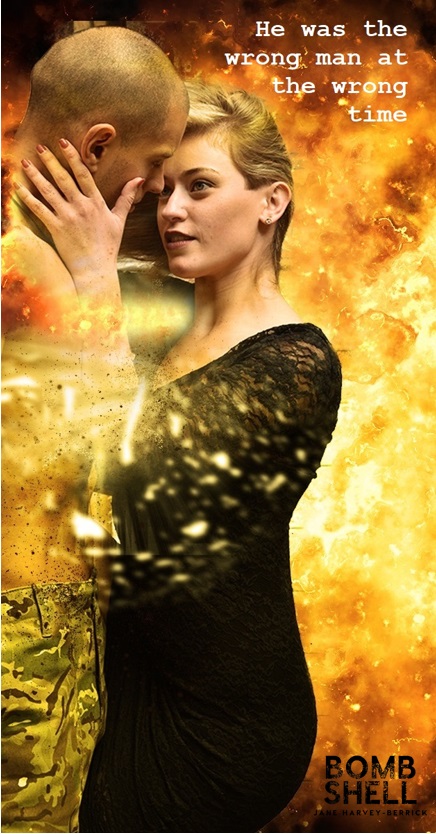 You need money, advice, or an alibi? Because I’m stony-broke, give shitty advice, and couldn’t give an alibi to a nun.

Why do we want what we can’t have?

My worst wounds were on the inside.

It was a godforsaken country, but God had forsaken me long ago.

Me and hope weren’t what you’d call close friends.

I did have some morals. Well, maybe one.

A man who spoke less than most people, but who meant more when he did.

James carried his service like a weight on his shoulders; Clay wore his like a badge of honour.

A storm was coming.

Somehow, when you’ve been a soldier, when you’ve faced death, that’s not where it ends, because I don’t think the living ever get to go home. Not really.

I looked cheap. Cheap and worn out and sad.

His silence held so many secrets.

What is it about women that make us want to fix men who are broken?

Why be sober when life is so shit?

Why do we hurt the people we love the most?

I’d fallen in love with him. What a stupid, stupid, careless thing to do.

We lay side by side and a million miles apart.

Tears leaked from my eyes as we lay side by side and a million miles apart. It felt like someone was scorching the earth around me. Would I burn with it? Or would I be frozen by the coldness of the man I loved.

Our bodies shared the emotions that our lips would never speak

I was just an ordinary working woman, doing my best, not always getting it right, but trying hard.

My heart twisted with love, then cracked open a little wider for this brave, broken man.

He was the wrong man at the wrong time. Could I forgive him? 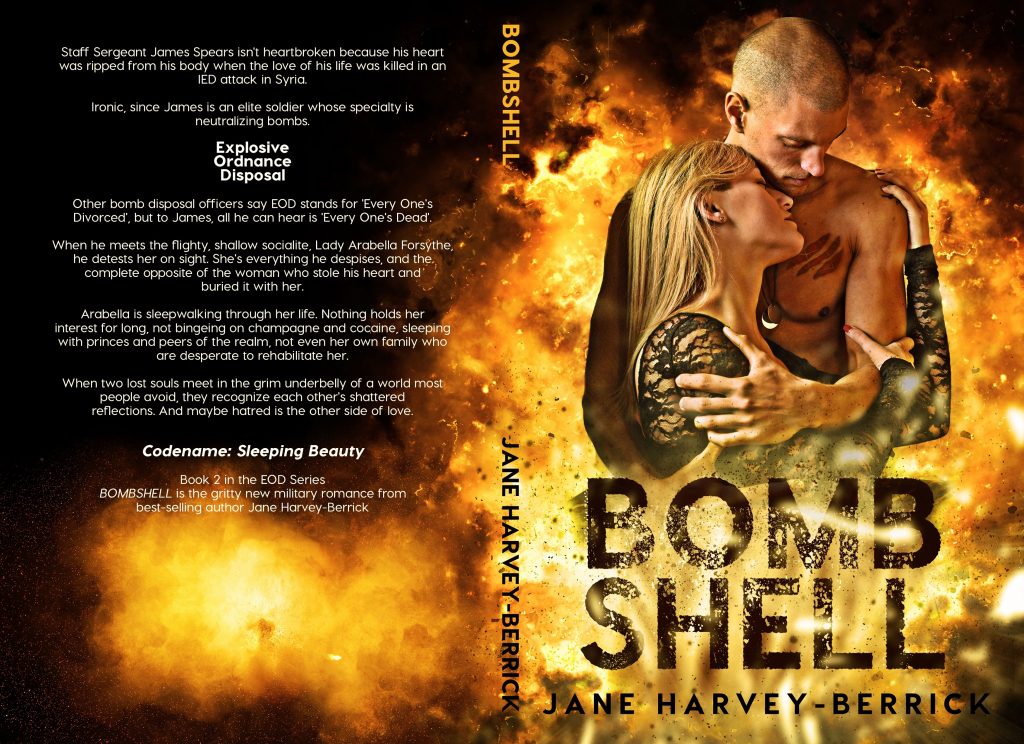