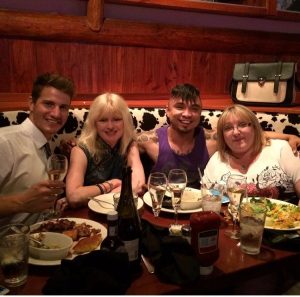 I first met Golden at the Hard Rock Café Event in Tulsa OK four years ago along with friend and blogger, Sheena Lumsden, and the model Tyler Gattuso (cover model for my books The Traveling Man, The Traveling Woman and One Careful Owner). I’ve met Golden a couple of times since then at other events, and he’s always such a gentleman—despite being totally ripped and top-to-toe muscles!

Starting out as a photographer, he’s also become known for his writing, especially his paranormal and steampunk stories. But let’s hear from the man himself.

Your career in the romance world has been in two parts: as a photographer and as a writer. Let’s start with the photography.

How did you start becoming a photographer of cover models?

I started the business back in 2012, born out of a hobby that included graphic design and photography to supplement (since stock photos were and sometimes still are fairly strange and unusable for a lot of projects). Business quickly picked up as did my social media following, leading to more clients and diversity. Things changed direction onto their current course in the early days when I had a client who owned a local nutrition store ask to shoot some of his sponsored athletes. A billboard and ads came from that, as did my love for that style of photography (versus infants and toddlers lol). I went to fitness shows thereafter and began to have authors ask about custom photo shoots for their book covers. Nearly 1000 covers and 2M followers later, here we are <3

What attributes do cover models need? I imagine it’s not just about a great body/handsome face.

They definitely need to have a passion and a drive for this kind of thing. The bodies are nice, as are faces (both being what can sell an image), but their personalities are definitely the driving force behind it all. When there is a combination of all three, the magic definitely happens and the work shows.

Do you have a favourite model? Why is that?

I love all my clients for different reasons, all of which contribute to me and my life in different ways, as well as experiences and memories. That said, I have grown closer to a handful over the years when our personalities mesh. Jake Wilson is one who I’ve known the longest and I consider a close friend/family. Chase Ketron (my number one seller) and RJ Ritchie are others.

Do you have a favourite photoshoot memory?

I do and it’s a simple one. I was driving to a photo shoot one day in St. Louis and as I was looking out at the countryside, it struck me that I am doing something many dream about – a job that isn’t really a job but a passion. I felt blessed at that moment and vowed to always stay humble and ethical to the best of my ability.

What sort of things can go wrong on photoshoots? Biggest disaster?!

LOL! There have been lots of issues from wardrobe malfunctions to models not looking like their photos (yikes!) but the two most harrowing incidents involved the near-loss of my camera. One was a shoot with RJ Ritchie locally in a muddy riverbed and the other was a shoot with Andrew England in the oceans off the coast of Tampa. In both cases nature tried to claim my gear and was 99.9% successful in doing so. That 0.1% that saved the day was pure luck.

Who (or what) inspires you as a photographer?

My late mother inspires me. She was always so proud of everything I did and I think her knowing that her son has the freedom he has these days would make her smile.

Is there anyone you’d like to photograph, given the chance?

I would love the chance to do a photo shoot with Chris Pratt or Chris Evans. It doesn’t have to be a long set, or even one with many photos, but just being able to see my watermark on one of their pictures would literally make me cry. And yes, I have a thing for them… secretly. Shhhh. 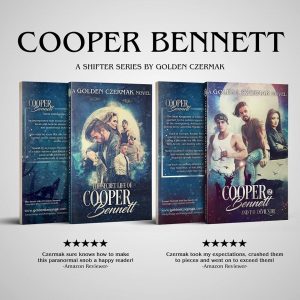 When did you start to feel like a writer, the moment for you when you thought, Yes! I’m a writer!

I think for me it’s when I wrote The Secret Life of Cooper Bennett. It was my 15th book or so, but I feel as though that book is my “true” voice as a writer. Listening to it on audio there were literal moments I had chills. Almost imposter syndrome in that “there is no way that I wrote that!” That made me feel great. Now, I need these new guys I’m photo shooting to give me a break so I can continue on the writing front! LOL

What is the most rewarding part of being a writer?

Seeing the thing come together after the long process of writing, editing, formatting, cover designing, uploading and publishing. Nothing beats the feeling of seeing your words in print or in hand as a paperback/hardcover.

As a writer, what is the piece of work of which you’re most proud?

I touched on this earlier but The Secret Life of Cooper Bennett is my most cherished book.

What do you want to achieve next?

Finishing the Cooper series and working on Steam Tycoon 2.

You’ve lived in the UK and the US (which is now your home), do you think that’s affected the way you write or what you write? Or if not, why not?

I think so. I’ve pulled from experiences on both sides of the pond and used them to shape the way I write. I think it made me wordier, but in a good way. My readers love the way they “feel like they are in the story” while “reading a movie.” Which is exactly the way I visualize things, so that means a lot to me as a writer to hear.

Is there any genre/topic that you’d never write?

I don’t think I could write historical… at least accurate historical. I would need to put a spin on it and make it some alternate universe thing to cover the inconsistencies I am sure to introduce (since I like more visual, action-oriented scenes).

What is the best piece of advice you’ve ever received: about life / about writing?

Don’t quit. It’s a mindset I’ve used in fitness, photography, and writing. There is a lot of hate out there, and when I say that I am not understating it. True loathing exists for people that “make it” in capacities others cannot and you have to learn to push through it when times are difficult. Imagine getting hate atop of writer’s block. Or trying to push for sales of calendars while encountering a wave of negativity. It’s hard. But you must press on… and realize too that no matter how small your steps are, it is still forward progress.

Having readers approach that are unable to speak because they are so nervous. I am the most approachable person ever, but something about that experience is humbling. Also, getting messages from readers/fans that just say “thank you for being so inspirational and positive”. That is all the medicine anyone needs to remedy a cloudy day.

Do you think writers are different to other people? Are we observers? Creators?

I think we tap into things and see them differently, yes. Now is that for the better or worse? I can’t say. I DO know though it allows us to see things beneath the skin, to read situations differently, and to plan and have backup plans accordingly. Well, unless you’re a pantser (versus the superior planners…) #CastThatShade lol <3

Have you ever written with a friend? What was the experience like? How did it differ from writing by yourself? What were the pros and cons?

I haven’t! I would love to do a co-written piece down the road.

A few years ago there were maybe just one or two male romance writers. What do you think has changed?

I think it has become more acceptable, but there’s also a long road ahead for more acceptance. I’ve been at events where readers avoid the male author tables (I mean not even coming up to snag swag or an information rack card) and that is sad, since they are missing out on some truly good stories. I think the realms of diversity too are changing for the better, though that is a whole other topic of discussion I would love to have with others some day similar to the panel I did about Own Voices at Apollycon.

Keep rising, as limit is only a word.

I would love to be a dog or a bird, but would likely be a slug or something lol.

Red. It oozes power and looks good as tank tops and undies. LOL

Carbs… all of them.

I would be able to do what I do now but travel more with my other half.

Beaches and sun, though sand gets in everything.

Give my work a try if you’d like genres with a spin (I mean how many authors have a book where the character talks to the reader, eh?). I think you’ll enjoy the ride. 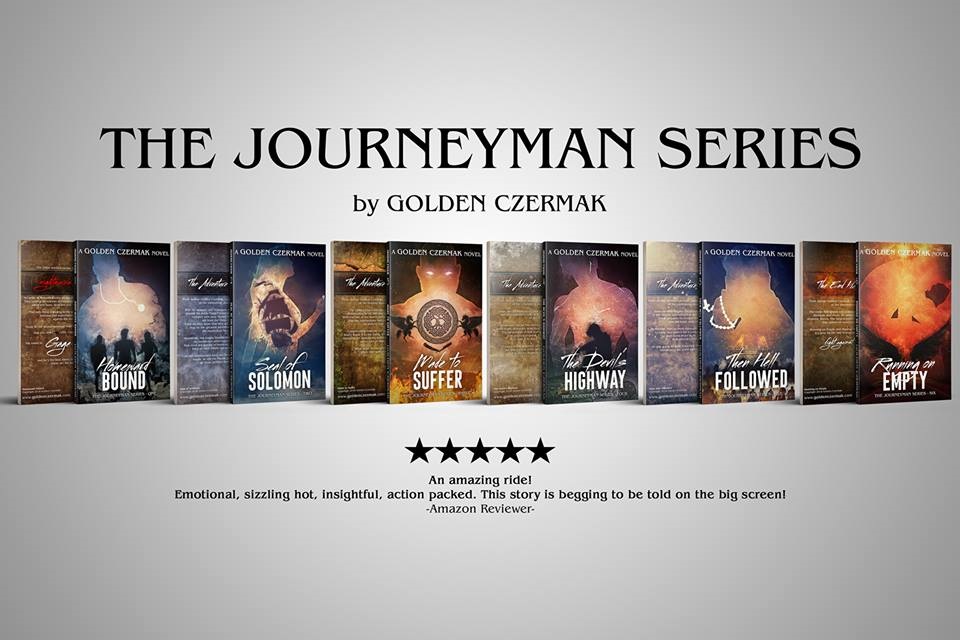