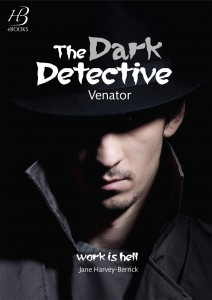 Scotland Yard is the headquarters of London’s police force: it is feared by criminals and known throughout the world. But it has a secret – a big, dark, nasty secret…

Max Darke is a 20 year old DC who keeps a close but tolerant eye on the demons who haunt the metropolis of London. It’s his job to ensure that some of their beastlier habits (blood rituals, human sacrifice, organ harvesting) are kept under control. But when The Brood – a new and horrifying gang of Level 3 Demons – come to town, things are looking very black for Max Darke.

And that’s not the worst of it. Even his assistant isn’t entirely trustworthy – or human – because Sophie Judas is a Level 2 demon.

Who or what is the Big Evil that is terrifying (and decapitating) the rest of the demon population? Who and what are the Powers That Be – and which side are they on? It’s not the best 21st birthday you could have.

One way or another, work is Hell.