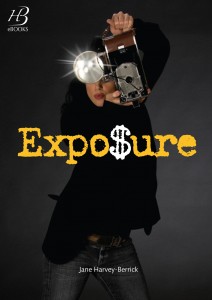 When journalist Helene La Borde overhears a chance conversation on a train, she becomes implicated in one of the great cover-ups in history.

Chased from her home, her first clue about the people trying to kill her is at a drug-fumed house among the surfers of Hawaii’s North Shore. Her second clue is revealed by a Shinto priest in Japan, and the third clue – or possibly a dangerous red herring – by an IT and security specialist in Bahrain. When she lands in the bizarre twilight world of conspiracy-theorist super-hackers on America’s West Coast, the danger is chillingly real.Along for the ride is ex-mercenary Charlie Paget. But Helene begins to wonder if he is protecting her or using her.When government agents do more than threaten, Helene is forced to tell everything she knows, or thinks she knows. A final chase through New York’s Holland Tunnel gets Helene to her publishing agent, and the chance to tell her story – if she dares. Helene’s personal cost is high. Set against the backdrop of international finance, government debt and the murky world of computer hackers, ‘Exposure’ is a fast-paced, intelligent thriller that will appeal to readers of crime, as well as action adventure fiction.

A thriller that will appeal to readers of ‘The Ghost’.