Do you remember the Freshman Fifteen? When emotional eating and late night snacking made even your sweatpants feel unpleasantly snug? I was way past that, another dozen pounds past that. My eyes blurred with self-pity. This was not where I’d expected to be at 34. Starting over.

Brian was the one who’d cheated—repeatedly, it seemed—during our ten year marriage, but he was the one who’d gotten the house because he earned enough to pay the mortgage by himself and had a shark of a divorce lawyer to help him on his way. I’d traded my lovely home with a shitty apartment on the wrong side of town, added nearly thirty pounds (take a bow, Ben & Jerry’s), and custody of our nine year old cat, Winston.

And Brian also had the brand new relationship with a girl who’d just graduated college.

I’d been replaced, and he’d updated with a newer, sportier, slimmer and prettier model. I had frown lines and newly gray hairs. Brian had a smug expression and air of satisfaction.

I hated my life. But I hated him more. He’d stolen my smile.

An older woman looked across with concern in her eyes.

“Are you alright, honey?”

Oh God, kill me now, because the kindness of strangers surely would.

“I’m fine, thank you,” I sniffed, giving her a watery smile.

She frowned, her eyebrows pulling together.

“It’s very hot in this train car. You shouldn’t be standing in your condition.”

Before I could understand or appreciate her words, she scowled at the row of men sitting reading newspapers or fiddling with their cell phones.

“And not a gentleman here who’ll give up his seat for a pregnant woman,” she said loudly, pointing at me.

Flames of humiliation scorched my cheeks, sucking heat upwards like a forest fire, as one of the younger men leapt to his feet.

“Ah gosh, sorry, ma’am. Please, have my seat. My wife said that being pregnant was like carrying a baby elephant for the last two months.”

Tears fell from my eyes and my voice wobbled as I thanked him and the older lady. I slumped into the seat as I let my hair fall across my face, attempting to hide my misery.

Six months of separation plus five months of divorce had led me to gorge on muffins and cookie dough ice cream, feeding my unhappiness.

I wasn’t pregnant, I just looked it.

At least I had my vacation to enjoy. Not that I could afford to go anywhere, but my wonderful sister had booked me into a spa hotel—a whole week of lazing by the pool, massages, manicures and pedicures, hair and makeup sessions, a couple of Zumba classes—it sounded amazing and I couldn’t wait.

I needed to re-boot my life in so many ways, and this was the week I was going to start. I knew I needed to break the pattern of negative and self-loathing behavior. I knew I needed to stop the emotional eating and late-night snacking (see above), and I knew this was my chance for a clean slate—healthy eating and taking care of myself. Perfect. Almost perfect. I wish Ella could have come as well, but this was her special treat for me. And she was taking care of Winston while I was away.

I looked up the hotel on my phone, just to sigh over the beautiful grounds, the luxurious rooms with king-size beds with Jacuzzis in the attached bathrooms, and the Bien-être Spa. Le Sigh.

The Amtrak train was crowded when we left NYC, but as we headed further north towards the Adirondacks, city commuters gradually disgorged, until I was one of just a handful of people who got out at Elizabethtown.

At the exit, a man was holding up an iPad that had my name written on the screen in large letters.

“Ms. O’Connor? Hi, I’m Patrick from Clover Hill Hotel. Is that all your luggage?”

He was a good-looking guy in his twenties, with one of those gym-buff bodies that women like me admired from afar but would never have the chance to get to know up close and personal.

He picked up my suitcase easily, even though it was pretty heavy, and I wondered why guys always carried suitcases when they had perfectly good wheels. Was it a macho thing? Then I decided to stop being so negative and just be thankful he was carrying it for me.

The town was quaint with an eclectic mix of buildings, from the stone-built train station to Art Deco offices, and the towering Gothic spires of a church we passed, plus lots of taller, modern buildings.

Tall pine trees edged the road, mixed in with the brighter colors of deciduous trees, and I opened the window to breath in the fresh air.

As the car climbed higher, the foothills became steeper with fewer buildings, until we finally swung through a graveled driveway with sweeping lawns on either side.

The spa hotel nestled into the lee of a hill, and as Patrick opened my door, I stood in awed silence admiring the view of the valley below and the mountains above.

“Beautiful,” I breathed out.

Patrick grinned at me. “I’ve worked here two years and I’ve never gotten tired of it.”

In the distance, I could see a row of green camouflage tents, and wondered if they had a bunch of Scouts camping here this week. I shuddered. I had nothing against camping—for other people—but as hot showers and flushing toilets had been invented, I was all in favor of having these wonderful facilities in the form of an attached bathroom. Roughing it was not for me. Nope, no way, no how.

Patrick carried my bag into the lobby, smiling at the receptionist in a way that made her cheeks turn pink. I didn’t blame her—he seemed like a great guy. And I refused to be jaded. I still believed in true love, even if it wasn’t going to happen to me.

“I’m very happy to be here,” I said honestly, handing her the booking form which my sister had emailed to me.

She took it with a smile … which faded rapidly as her eyes scanned the document.

“Um, Ms. O’Connor, we have a small problem with your reservation.”

My stomach sank. “What sort of problem?”

Josh Lander eased his Lexus down the off-ramp of the I-87 and felt a huge weight fall from his shoulders as he started the last part of his journey. It was just the break he needed to clear his head, and he felt grateful to his business partner for arranging this week away.

Yeah, he’d almost refused to go, but Dylan could see that he needed some downtime, even if Josh refused to recognize that working 16 hours a day, seven days a week wasn’t healthy.

They’d plowed everything they had into their tech startup, but the difference was Dylan had a wife to go home to; Josh had no one. Not even a cat. And his houseplants had died because he’d forgotten to water them. Since Veronica had dumped his ass a year ago, there hadn’t seemed much point in being at home.

Strange, that’s when Veronica thought she’d like to have another try at their relationship. He’d declined, reminding her that she’d told him he was wasting his time working in IT because he was ‘a dumb grunt with a great body but no brains’ and that he should have stayed in the army.

She was right about one thing: he missed the friendship of his lifer-army buddies. He missed the camaraderie and shared hardships.

Dylan was his friend from high school and they’d been friends for more than 20 years. He managed the marketing side of their business and before he’d gotten married, he and Josh had always had one vacation a year when they met up to go wild camping.

Josh smiled to himself at the thought of Veronica sleeping in a tent or not wearing makeup for a week. Why the hell had he ever thought they’d be compatible? Oh, right, he hadn’t. He’d just been lonely and wanting the kind of relationship that Dylan and his wife Valerie had.

As he drove, he watched the scenery changing, the air so clear, he could see for miles.

He’d never been to this part of the Adirondacks before, and although it wasn’t wild camping, it was close enough. Dylan wanted Josh to get the break he desperately needed, but he wanted him to have a phone signal, too. This had been the best compromise.

Finally, he arrived at the hotel where the bootcamp was taking place. A whole week of dawn runs, military-style drills, survival training, and civilian-friendly assault courses. He was particularly looking forward to the mud-biking and cross-country BMX-ing. There was a chance to learn archery, too, something he’d always wanted to try.

Josh was glad to climb out of his car and stretch out his spine. At 6’ 3”, he needed a car with plenty of room, but even the Lexus had started to feel cramped after more than four hours driving.

He carried his bag to the lobby to check in, and saw a cute, curvy brunette staring at the receptionist with an expression of horror.

“Uh, we’re not exactly closed,” said the receptionist, her face bright red. “Our bootcamp is open this week. We’ve … uh … we’ve reserved you a tent…”

“A tent? You mean sleeping outside?”

Josh couldn’t help smiling at the look on the brunette’s face. He was pretty certain she’d be turning around and driving back home any minute now.

“Is at least the spa open?” the woman asked weakly.

“I’m sorry, ma’am, it’s being renovated along with the rest of the hotel.”

The woman groaned, and Josh began to feel sorry for her. She looked so beaten down.

“So, bootcamp this week, huh?” she sighed. “What exactly does that mean?”

As the receptionist reeled off information about the ‘invigorating’ cold water showers, the ‘exciting’ abseiling opportunities, and the ‘back to basics’ menu, the brunette seemed to shrink into herself.

“I can see if we could reschedule your stay for later on in the year?” the receptionist offered.

Then the brunette stood up straighter. “You know what? I’m going to stay,” she said, shocking the heck out of Josh who would have bet good money that she’d have walked away. “I came here to try new things, something different: what can be more than different that a bootcamp, right?”

Josh found himself wanting to high-five her. If Veronica had been given the wrong booking, she’d have been screeching up a storm by now, promising to sue the hotel, the reservation agent, and probably her own sister, as well.

The receptionist handed the brunette a brochure about the bootcamp.

“I just need to check-in this gentleman,” she said, smiling at Josh, “then I’ll have someone walk you over to your tents, if that’s okay with you, Ms. O’Connor?”

Josh grinned at both women. “Yep, sounds good to me,” he said, and smiled at the brunette. “Josh Lander, nice to meet a woman who’s willing to give bootcamp a try.”

“Oh!” she said, sounding surprised. “Thank you, I think. I’ve never done anything like this before. I’m Mimi O’Connor.”

He took her hand in his, trying his level best to keep his eyes fixed on her face, not on her amazing rack.

“Well, Mimi O’Connor, I think this week is going to be something to look forward to.”

She smiled back at him shyly. “I think you’re right.”

I hope you enjoyed this short story. If you’d like to read them first, you can sign up to my monthly newsletter → HERE 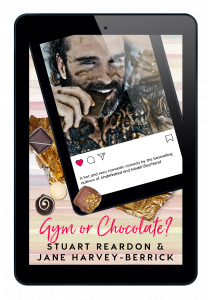 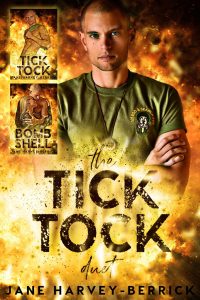