I’m greatly honoured to have published the memoirs of Justin ‘Troll’ Bell QGM.

He was a soldier in the British Army for 23 years, an expert in bomb disposal, for which he won the Queen’s Gallantry Medal. He was a husband and a father, and he was my friend.

We became friends when I started writing the play Later, After, and it was Justin’s expertise that made it so incredibly moving. You can see the theatrical trailer on the play’s page on this website.

Over the years, he sent me poems and writing he’d done about his time in the Army and how it affected him. When he became ill at the end of 2018, the race was on to collect all his work together and publish it. None of his friends believed that cancer would kill him, when two decades of terrorists couldn’t.

Just before Justin died in 2019, I was able to show him a paperback copy of his memoirs, but it was a rushed job and not as polished as I knew he would want it to be. It was two years before his widow and I felt able to face finishing the job. 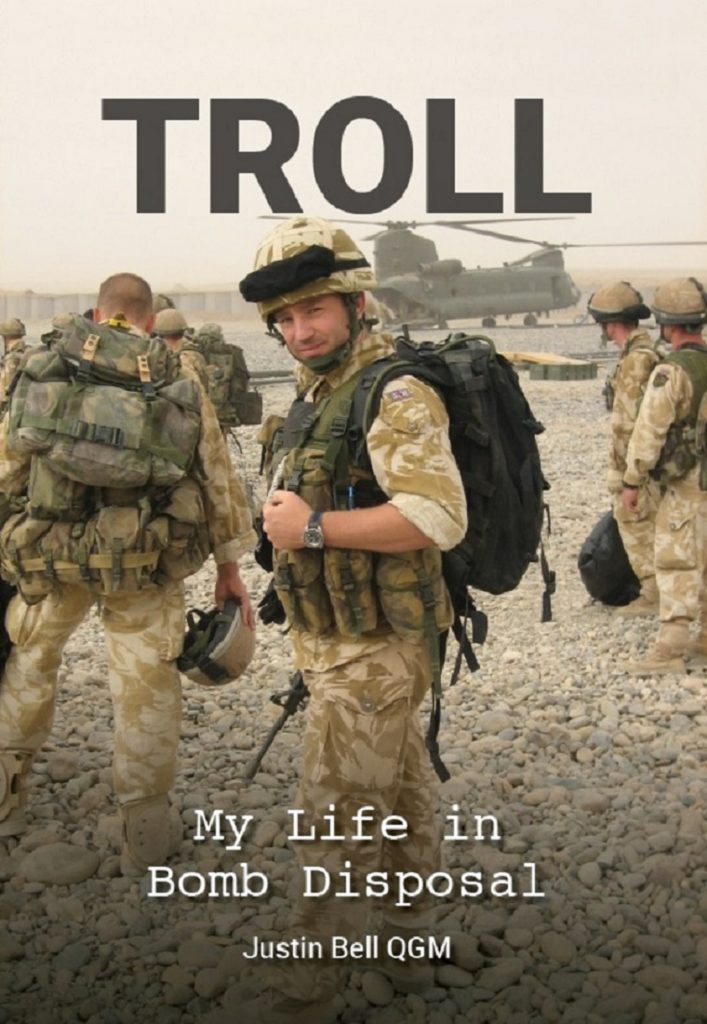 Justin ‘Troll’ Bell served in the British Army for 23 years, most of those as an EOD Operator – a bomb disposal expert.

This is his story of tours served in Northern Ireland, Iraq and Afghanistan – the adventures, the camaraderie, the hard truths and painful costs of a dangerous and stressful job.

But also the jokes, the pranks, and the stark humanity of a man who made ‘The Lonely Walk’ many, many times.

* * *
Justin J Bell joined the British Army in the late 1980s and quickly qualified as an Ammunition Technician within the Royal Army Ordnance Corps. He completed over 20 years’ service as an Army Counter Terrorism Bomb Disposal Operator seeing service in three major conflicts.

He commanded EOD operations on High-Threat tours in Northern Ireland, Iraq and Afghanistan; supporting over a decade of front line UK counter-terrorism activity including responding to the 2005 London bombings. He constituted part of the National Contingency Capability for dealing with weapons of mass destruction.

Justin supported discrete Foreign and Commonwealth Office tasks to various countries as part of a wider defence diplomacy programme, and finished his service as a Senior Explosive Ordnance Disposal Soldier responsible for the supervision and provision of multiple EOD teams in support of UK National Contingency Operations. During his service he received the Queen’s Gallantry Medal for his EOD activities, and was subsequently rewarded a second time on the Queen’s New Year Honours list on his retirement.

Identifying that the psychological well-being of EOD Operators was being largely ignored, he was instrumental in the implementation within EOD Units of the Trauma Risk Management programme originally instigated by the Royal Marines. He retired in 2009 to spend more time with his wife and children and pursue a career lecturing.