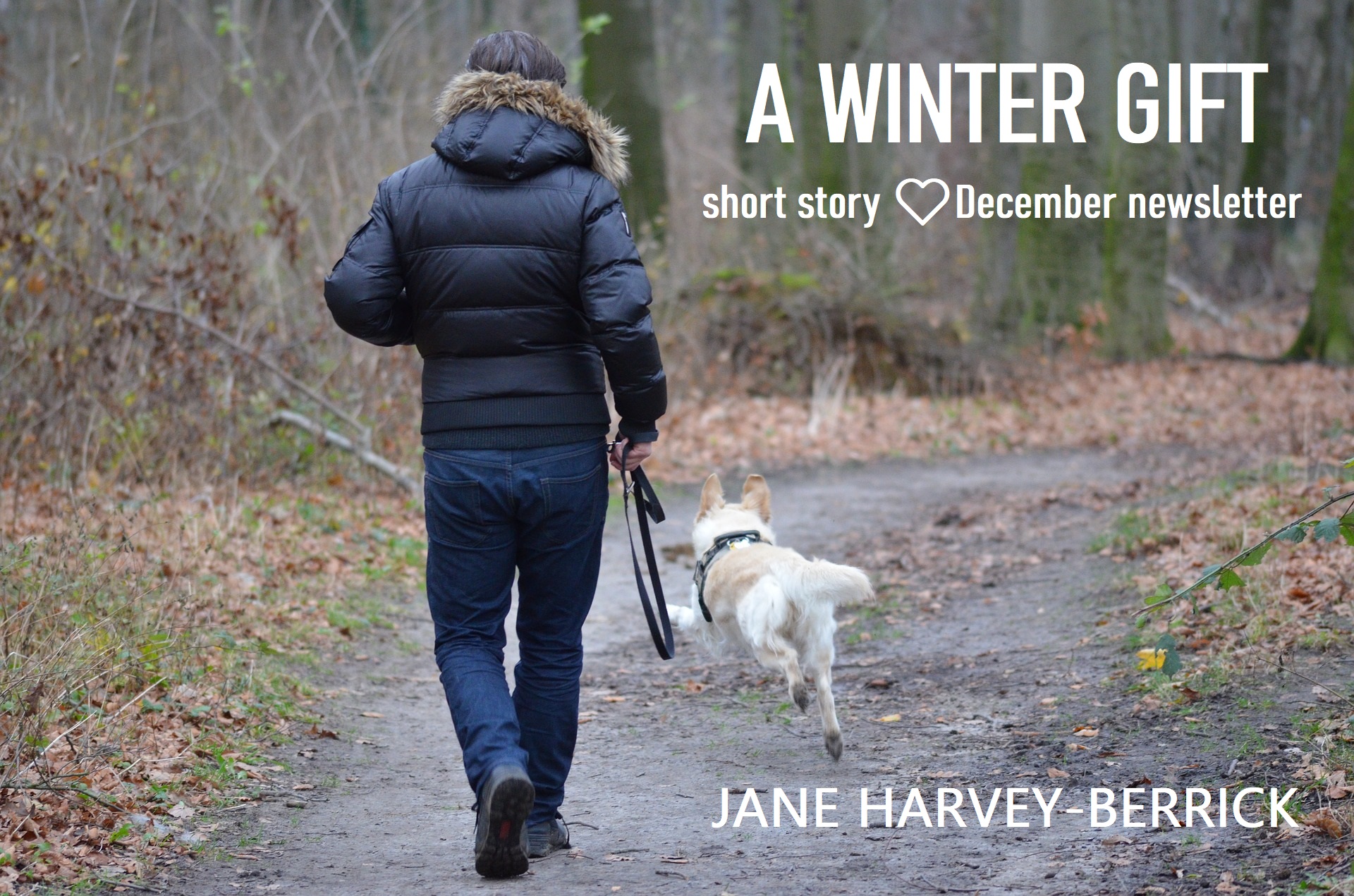 Stan was more used to the cold than me and better equipped to deal with it. His thick fur shielded him from the worst of the biting wind that whipped along the street, snapping and tearing at my snow-soaked clothes.

I pulled my jacket tighter around me, burying my face in the layers of scarves that left nothing but my eyes uncovered. I shivered so hard, my whole body trembled. I didn’t remember the last time I could feel my feet.

A man with a heavy overcoat, laden down with brightly-wrapped gifts darted around me cursing under his breath, and I smiled grimly to myself.

“We’re not invisible today, Stan. Although I’m not sure that’s a step up.”

Stan rubbed his heavy head against my leg, and his deep brown eyes lifted in a frown. He seemed to say, Life sucks, boss.

We were both used to being ignored. It happens a lot when you’re homeless and hopeless.

But today was different. Today we had somewhere to go. And although we walked slowly, plodding along the frozen streets, we walked with purpose. My stomach growled, the emptiness burning a hole through the middle of me. I licked my lips in anticipation—Stan and I would eat well today.

Denver Rescue Mission was a large building on the industrial edge of the city, a distinct redbrick warehouse built in the 1930s, I’d guess. They were open 365 days of a year with 300 beds—more when the weather dropped below freezing. I never stayed there because of Stan.

But I knew that he’d be welcome today, although no sleepovers. Besides, I didn’t like being around people much.

The building seemed to glow with light and cheer as we approached, the large neon cross calling the faithful and unfaithful alike.

As we arrived at the front door, an older man in worn jeans and a thick sweater stood at the entrance.

I nodded without speaking, smiling slightly as he bent down to stroke Stan.

“He seems like a good ole boy,” he said, “but you’ll still have to put him on a leash.”

I nodded again, and pulled a piece of rope out of my pocket and tied it to Stan’s collar. He gave me an offended look, huffing softly.

“Please make yourselves at home,” said the man. “We have a donated clothes table if there’s anything that you need, showers and laundry are in the back, but there’s a waiting line for both, I’m afraid.”

We walked inside and were immediately hit by a wall of warmth that had me peeling off my hat, gloves, scarves and jacket. As the heat hit my wet clothes, a pungent wave of body odour drifted from them. I knew that I reeked, but most of the time, you can’t smell yourself after three days—and it had been a lot longer than that for me since I’d last showered. Stan didn’t care. But here, among people, humiliation was stronger than hunger. And that’s saying something when you haven’t eaten in two days. Or was it three?

I gathered my stinking clothes, bundling them into my duffel bag. Then I snatched up jeans and a couple of shirts from the donated clothes. You know you’ve hit a new low when donated underwear seems like a good idea.

There was a young girl working the clothing area, late teens I’d guess—a college girl or maybe a senior at high school. Even though I was only 32, I felt old. Old and tired.

Her parents hovered behind, her father wearing black jeans, a dog collar and a wide smile; her mother-friendly and bustling.

I was used to people side-eyeing me and Stan, but this family met my eyes, not afraid to smile.

As the girl handed me some extra t-shirts, her eyes fell on Stan.

I nodded, a smile hidden behind my thick beard.

My smile dropped. I hated this part.

Her eyes widened as she watched me warily.

“Ssss-tttt-an,” I finally managed to spit out.

I nodded, relieved that she wasn’t going to make me repeat myself.

Stan’s tongue lolled from his mouth in a happy smile, and she giggled when he licked her hand.

Her laughter was like liquid sunshine, and for a moment I bathed in the warmth of her smile. But I wasn’t the only one. Across the room, a boy of about the same age looked up at the sound of her voice. His eyes fixed on her immediately, admiration obvious in his gaze, desire in his eyes.

He was working on the food line, handing out plates of roast turkey, vegetables and mashed potatoes. He seemed out of place here, in his neatly-pressed, preppy clothes. But when he looked at the girl, I knew exactly why he was here.

Then the boy glanced away, his lips pressing together as his expression dissolved into hopelessness.

My stony heart cracked, and I remembered what it was like to feel that for another person, to feel love. My older, cynical side wanted to warn the boy to stay far away from the girl, from women in general, but I knew he wouldn’t listen. And maybe that was the right thing to do. Just because my wife had turned out to be a cheating, evil bitch, it didn’t mean that all females were. Most of them, probably. But not all. Not this girl with the smiling eyes.

I glanced in the direction of the showers, seeing that the line was shorter now. I thought longingly of hot water and soap, trying to remember the last time I’d been able to shampoo my matted, greasy hair.

The girl noticed the direction of my gaze.

“Would you like me to look after Stan while you take a shower?”

I was going to say no. I didn’t trust anyone else with Stan. He was my only family now, and I couldn’t lose him. But some animal instinct told me that this girl wouldn’t hurt me and she wouldn’t hurt Stan. It was hard to trust, but…

I glanced across at the boy again as his eyes flicked to the girl. He couldn’t keep his eyes off her.

“Stan will be fine with me,” she said softly, as if reading the hesitation and doubt in my face. “I’m Honor.”

Of course you are, I wanted to say.

The boy was still watching her, even as he served the turkey dinner to a long line of homeless people.

And then I had an idea.

I knew I was broken. I accepted that. Broken and probably crazy, but maybe when society has abandoned you, that’s when you see most clearly the things that really matter.

My holiday gift to this girl would be trusted.

“Oh! Of course,” she said. “Stan must be hungry, too. Would you like me to feed him while you’re showering?”

I nodded briefly, then knelt down next to Stan and whispered in his ear so only he could hear.

“Turkey coming your way, buddy. Just be nice to the girl. Do that cute thing with your eyes. Yeah, that’s it. Go sit beside that kid who’s jonesing for Miss Honor. Our good deed of the day.”

He cocked his head to one side, and I’d swear he understood every word.

He trotted off with Honor, enjoying the attention, as well as the aroma of cooked meat and gravy that filled the room.

I couldn’t help smiling when the boy just about tripped over his own feet when he saw the girl walking toward him, Stan at her heels.

I watched long enough to see him fix a plate for Stan, listening intently as the girl chatted away to him.

Joy, sadness—it’s all just a toss of the coin. And who’s to say which way it will fall for you.

I’d had it all: a wife I loved, a home, a job that I enjoyed and was good at. And I lost it all. Everything. Maybe even my sanity.

Life is made up of moments.

As I showered, enjoying the blistering heat that penetrated the cold center of my heart, I thought about the boy and Honor. Maybe it was their moment today. Maybe that moment would be the one they’d always remember—for good reasons, I hoped. But you can never tell.

Maybe in ten years, they’d be screaming at each other while their divorce lawyers prepared the paperwork.

But today, I’d seen something good, something hopeful. Maybe a crazy person sees things others ignore.

I am but mad north-north-west.

When the wind is southerly, I know a hawk from a handsaw*.

I dressed in clean clothes for the first time in a month. I held the old, plaid shirt to my face, breathing in the faint scent of laundry soap. My eyes burned with unshed tears as a thousand memories filled my head, a thousand sounds, a thousand colors, voices and laughter, smiles and pain. Too much pain.

And I knew. This was my moment, as well.

I threw my soiled clothes into a washing machine and went to find him.

He was still with the girl, lying at her feet, his eyes sleepy and his belly full. This was what he deserved. His life had been hard enough, and in his old age he deserved more.

Guilt filled me, along with the determination to be better, for his sake.

Honor smiled as I bent down to stroke Stan’s ears.

Then I sat at the long trestle table and ate my turkey dinner, my eyes fixed on my food, glancing up when someone spoke to me, but not uttering a sound in return.

No one minded. Here, crazy was part of the picture. Besides, I had Stan. And people spoke to him when they couldn’t speak to me. It worked for both of us.

The boy and girl smiled at each other, and I watched them swap phone numbers.

My work is done. It was up to them now.

I pulled on my new-old overcoat, wrapping two scarves around my neck and face as I pulled my beanie down low over my ears.

Stan stood beside me, leaning his heavy head against my leg.

The girl looked up at me, a huge smile on her face.

“Thank you for coming!” she said. “I don’t even know your name. Well, happy holidays!”

I nodded briefly, then dropped my eyes to the floor.

We were already at the door, when I turned to look at the boy and girl for one last time.

And then we walked out into a world of white.

You can read the rest of Alex and Stan’s story in ONE CAREFUL OWNER on Amazon. FREE in KU