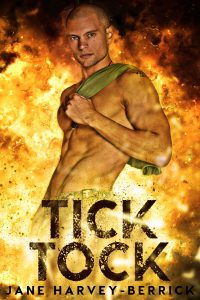 A story of courage and compassion in the darkest places

If you love military romance, if you love suspense, then TICK TOCK will be for you

“A story of courage and compassion in the darkest places”

Forget SEALS, Marines, Fighter Pilots – I have the most dangerous job in the world. And I love it.

James Spears is part of an elite group who lives and breathes danger. Where others run from it, he walks towards it, calm, focussed ice-cold. James is a top EOD operative.
Explosive…
Ordnance…
Disposal…

You’d call him a bomb disposal expert. Or crazy. A guy with a death wish. He’s heard it all before and he doesn’t give a shit. He’s the best.

They say he doesn’t have blood in his veins, he has ice. They say he has no nerves.
All that’s about to be tested.

Amira is recruited by the CIA to infiltrate a terrorist cell living in rural Pennsylvania. She’s the perfect plant, no one would ever suspect her. Because her brother was killed when a bomb was dropped on the Syrian hospital where he was working as a doctor. And now hate burns deeply inside her. She’s perfect.

That’s what they tell James when he’s told to train her to be the best damn bomb-maker there is. In a secret camp, deep in the woods, James teaches her everything he knows about building bombs. He’s not a praying man, but now he’s really hoping that he’s doing the right thing.

Can he trust her? Will she ever trust him? Who is playing who? And who will pay the ultimate price?

Book 1 in the EOD Series